Note:  A year ago (March 2017) I posted the original “Lord of the Rings Celebration … Sam’s Rabbit Stew”. It proved to be, hands-down, the most widely read posting in the two-year run of PetersPicksBlog.com. Since our family celebrates March 25 every year, we thought we would post a new version of the LOTR meal and paired with a different wine. The changes and additions made to the original version are printed in purple italics.

Background:  March 25 is a day of very special significance in the history of Middle Earth. It is the day the One Ring is destroyed in the fires of Mount Doom as told by J.R.R. Tolkien in his epic literary masterpiece, The Lord of the Rings (LOTR). This is a special book to our entire family … we’ve each read it multiple times, individually and together as a family.  So, we celebrate the book every year on this most important day in Middle Earth, March 25. We celebrate it by creating a meal composed of foods described in various parts of the story. 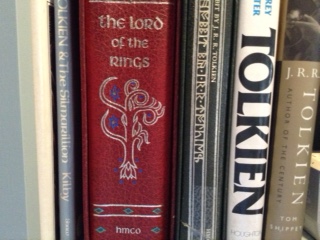 Food:  This is a meal that Samwise Gamgee made for his master, Frodo Baggins, in Ithilien on the border of the Dark Lord’s fortress lands of Mordor. Their guide (and sympathetic villain), Gollum, has brought Sam a couple of freshly killed “conies” and Sam asks if he might go find him some “taters” for the stew. “What’s taters, Precious?” is Gollum’s response. Sam never gets his taters, but we’ve added them to our stewing rabbit, along with some simple seasoning (salt, pepper, crushed herbs). Sam would be pleased. Sam and Frodo carried dried fruit and elvish honey cakes called “lembas” on their perilous journey to Mordor, so we’ve added them to the meal. Our version of lembas is a recipe for Lebkuchen that we make at Christmastime. We save out some of the cookies, unglazed, then freeze for eating at our LOTR meal.

The mushroom casserole is our invention based on the most welcome gift of a basket of mushrooms Farmer Maggot and his wife gave to Frodo and Sam following their frightening first encounter with the Black Riders, servants of the Dark Lord. 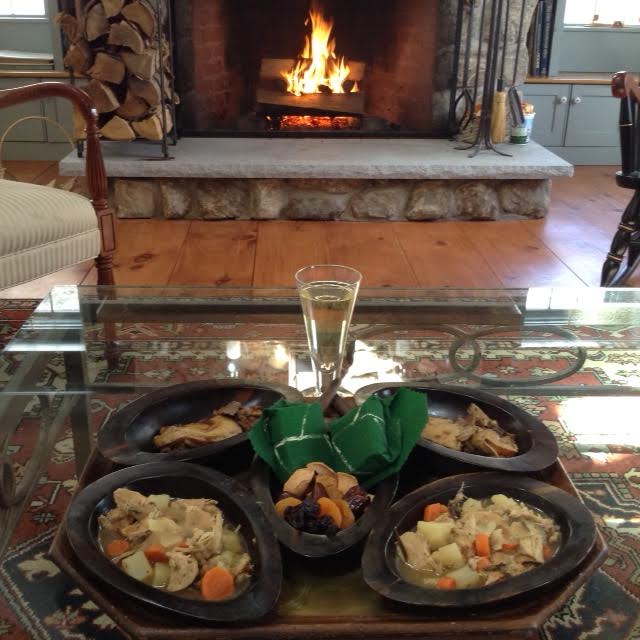 Wine:  Sam and Frodo did have occasion to drink what was referred to as “the golden wine of Gondor”. In the book, parts of the story take place around the Anduin River. Since the map of Middle Earth looks suspiciously like a map of Europe (I know, it’s a stretch), we’ve imagined that the Anduin might be the Rhone River. And … here’s the connection … Chasselas is a widely grown wine grape throughout the Rhone Valley. Since the Anduin flows through parts of Gondor, the “golden wine of Gondor” must be … drum roll … Chasselas! Ta da!! Clever, eh?

Back to the wine … Chasselas is one of those widely produced wines that few people outside of Middle or Eastern Europe have ever heard of, much less drink. Yet, it’s been grown for at least 500 years in Switzerland, France, Germany, and even parts of North Africa. Today, it is most often used as a blending wine . The wine for this meal comes from Domaine Albert Boxler a highly regarded winery in Niedermorschwihr in the Alsace wine region of eastern France. This family has been making wine here since their ancestors moved here from Switzerland in 1673. 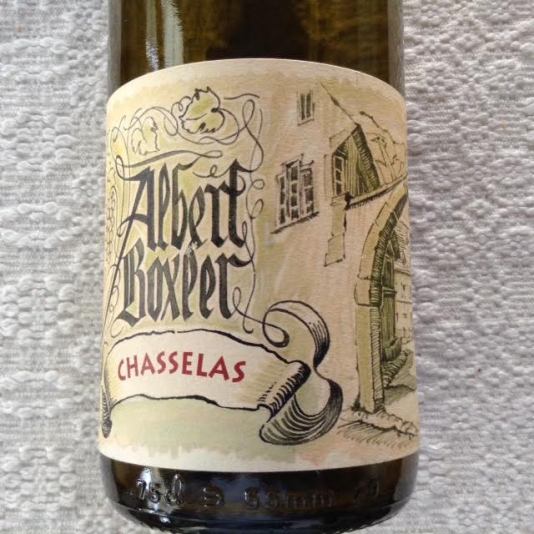 Tasting Notes: This pale golden wine is decidedly floral in both its nose and palate. A clean, fresh fragrance of clover, green grass and a bit of honeysuckle. Very delicate, gentle taste of flowers and apricot. This is a simple tasting wine, with the promise of a nutty, more complex flavor as it matures beyond these four years from the 2014 vintage date. The wine goes particularly well with the honey cakes and dried fruit accompanying the meal.