Food:  Our Thanksgiving dinner has remained mostly unchanged for decades. We no longer raise our own turkeys, and we now brine the turkey with our own cider added to the water, salt, star anise, cinnamon sticks, dried apples, and juniper berries, among other spices. The turkey is served with cornbread stuffing, Berks County filling (a family recipe of mashed potatoes with an egg and some stuffing mixed into it and baked), creamed onions, pickled beets, peas and carrots. I start salivating just typing out the menu on the screen! The meal can accurately be described as a ensemble of flavors, and it requires a wine that can be the orchestral conductor that brings these elements together into a memorable symphony. Enter … Ridge Vineyards Geyserville. 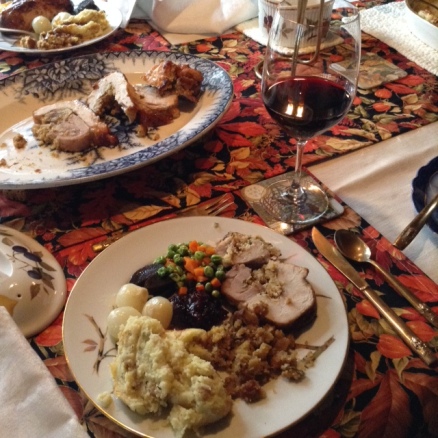 Wine: Turkey, like Chicken and Pork, is what we refer to as one of those universal foods that pairs beautifully with a diversity of red or white wines. For our special Thanksgiving meal this year, we selected a favorite red wine that is a blend of 73% Zinfandel, 17% Carignane, 9% Petite Sirah, and a scant 1% Mourvedre. Ridge Vineyard’s Geyserville estate is located in the Alexander Valley wine area in the northern part of California’s Sonoma County, Some of the vines grown by Ridge to make their Geyserville wine are said to be more than 130 years old.  These old vines are at least partly responsible for the intensity of flavors in this Zinfandel blend.

Tasting Notes:  A deep purplish red in color. Delightful aromas of blackberry, leather and earth. A rich full flavor that combines layers of blackberry, hedgerow fruit, earth, allspice and mace. The pleasant tannins, balanced acidity, and earthy flavor (possibly from the inclusion of a little Mourvèdre) tip it more toward the taste of an Old World wine, despite its California source. Flavors in the wine are deliciously enhanced by the cornbread stuffing, Berks County filling, gravy and creamed onions, and vice versa. Exquisite.