Food:  Traditional New England-style Fish Chowder is typically made with haddock or cod. However, as these fish stocks are coming under increasing threat, some people are turning to an alternative fish that is every bit as good tasting … hake. Many would say it is even more flavorful … and less expensive. More good news … hake is being fished using more sustainable techniques. Hake is more commonly marketed on the European side of “the pond,” with Spain being the largest consumer there.

Back to the “chowdah”. Our hake chowder is made with the same broad strokes as in the making of any good New England fish chowder, substituting hake for the haddock or cod. Fry up a bit of bacon, add some chopped onion and cook until translucent. Meanwhile boil up some diced potatoes in water. Drain. Cut up hake filets into 1 inch cubes. Add the uncooked hake to a pan with fish stock, potatoes, bacon, onion, milk, parsley, salt, pepper, and turmeric (for that golden color). Heat gently until the fish chunks are just cooked through. Be careful when stirring and serving to retain good size pieces of fish. Check for seasoning. Done. Delicious!

Hint:  Make it a day ahead of time to deepen the flavors (the “cold cure”). 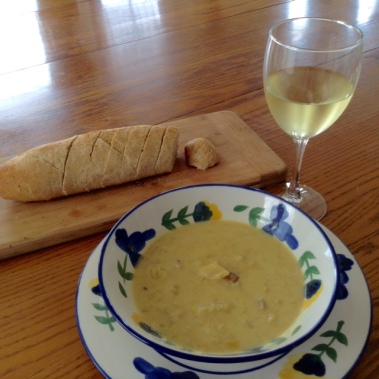 Wine:  Falanghina has its origins in ancient Greece. It is said that Falanghina wines were highly prized by the Roman writer and philosopher Pliny the Elder who was so inspired by the wine as to write the famous words  in vino veritas (there is truth in wine). For much of its long history, Falanghina wines have been produced mainly in the Campania wine region of southern Italy near the city of Naples. The vines thrive there in the volcanic soils that surround Mt. Vesuvius. 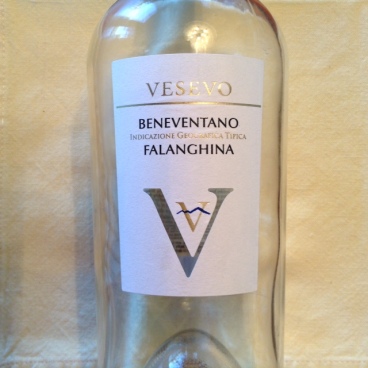 Tasting Notes:  Pale Gold in color. Smells of green apple and apple blossom.  Apple flavors (both fruit and floral) on the palate, with a gentle, subtle hint of citrus. Flavors really emerge as the wine warms up. The delicate citrus notes very nicely complement the light saltiness of the chowder.