Food: Every fall, sometime between late September and early November, we have friends over for a traditional German meal to celebrate Oktoberfest and our own German heritage. The meal consists of multiple hearty foods that have been part of German culture for eons. The picture below is a plate showing the different foods that make up the feast. Starting withe the front of the plate, we have Sauerbraten (marinated pot roast in a sweet-and sour wine sauce). Moving clockwise there is Kartoffelpuffer mit Apfelmus (potato pancakes with applesauce). Continuing clockwise, we have Rotkohl mit Äpfeln (red cabbage with apples). Further along on the right side of the plate is Hasenpfeffer (jugged hare made with port wine and peppercorns) served with noodles. Finally, in the center of the dish is Sauerkraut and Bratwurst. Looks a bit monochromatic, but the flavors are mind-blowing. Well worth the few days of preparation if you have the time. The recipes we use come from a couple of terrific German cookbooks that date back to the 1950’s and 60’s … Lüchow’s German Festival Cookbook and The Cooking of Germany (part of the Time-Life series Foods of the World). Lüchow’s, located in New York City, was arguably the most famous and highly regarded German restaurant in America for almost 100 years before it closed its doors in 1986. 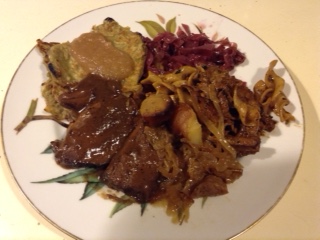 Wines:  We should start by saying that a good German beer would be a fine pairing for this meal. However, the foods that comprise the meal are full and rich, so the lightness of wine (versus beer) makes for a nicer complement to the meal. It should be noted that one might think a red wine would be a better pairing given the presence of beef, sausages, and rabbit.  The inherent sweetness and complexity of these white wines, foiled against the vinegar component of several elements of the dish (sauerkraut, red cabbage, and sauerbraten) are good reasons to choose the rieslings over red wines. Both of these wines originate in the Mosel (Moselle) region of Germany, roughly halfway between Luxembourg City and Frankfort. The Mosel River is a tributary of the Rhine and runs near the German border with Luxembourg. The two websites listed below provide wonderful pictures and video of the dramatic, steep landscape that the vineyards are planted in. This region produces the finest rieslings in the world. The terms Kabinett and Spatlese that help identify these wines refer to the time of the grape harvest and the resultant sweetness and complexity of the wine. Kabinett indicates a wine from early harvested grapes, while Spatlese wines are made from grapes left on the vine longer which concentrates the sugars in the grapes more. If the grapes were left on the vine even longer, the wine would be an Auslese. 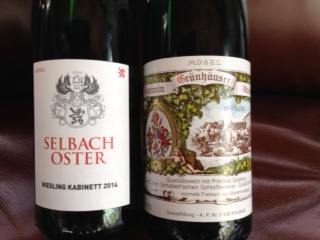 Tasting:  The youthful 2014 Selbach Oster Kabinett has a vibrant nose with distinct aromas of green apple and green melon. The palate is clean and fresh, mirroring the apple and melon in a just barely ripe state. The blush of youth! The older 2007 Maximin Grunhauser Spatlese has a more refined nose revealing a medley of tropical fruits. The palate is smooth and round, with flavors of honeysuckle and ripe apricot and peach. The sweetness is balanced nicely with the acidity. Despite the differences in the wines, they both go very nicely with this traditional German meal.

Other Wines that Pair Well with This Food:  Most any Riesling from Germany, New York State, or Washington State. Or Spatburgunder Rotwein (German Pinot Noir)