Food:  Sunday dinner in our house is almost always a roast of some kind. Roast chicken, duck, game, turkey, beef, lamb, or pork. Chicken is our most commonly served roast on Sundays since we have raised our own chickens for almost forty years. But, a few times each year, we enjoy a pork roast … a simple bone-in pork seasoned with just salt and pepper and maybe a little sage and thyme. For the uninitiated, a bone-in roast of any meat is always richer and more flavorful than a boneless one, albeit a bit more involving to carve.

One year, along with our chickens and turkeys, we decided to raise a couple of pigs so that we might enjoy our own pork and bacon. What an adventure! Every day, upon my return home from work, Frank and Linc (yes … those were their names!) would run over to the edge of their electric wire fence and stick out their snouts in friendly greeting to me waiting to be scratched and patted. What charming, intelligent … and enormous … animals. I had sworn that I would not get emotionally attached to them. Yeah … right. When it came time to slaughter them, I just couldn’t do it. I retreated to a distant locale, out of earshot, while a neighbor did the deed. And when it came time to “enjoy” some homemade bacon … I lost my appetite. (sigh) So much for that little experiment with self sufficiency. But we still raise our own chickens … they’re not nearly as personable as pigs. And … we don’t give them names.

Wine:  Of the six Australian states, South Australia is by far the biggest wine producer in the country, accounting for half of Australia’s wine production and home to several of the most iconic vineyard locales … Barossa, McLaren Vale, Coonawarra. Red wine is king here … Shiraz and Cabernet Sauvignon being by far the most widely planted varieties and among the most highly regarded Australian wines. Grenache is a bit lesser known, but gaining considerable “street-cred” in Australia as both a blending wine and a single varietal. Indeed Australia accounts for almost a tenth of the world’s production (behind Spain, France, and the U.S.) Its fine reputation was long ago solidified in southern France, where the grape has a long history in the Southern Rhone wine region, and where Grenache is blended with Syrah and Mourvedre in the creation  of such notables as Côte-du-Rhône, Gigondas, and Châteauneuf-du-Pape. In wine-loving Spain, Grenache is called Garnacha. Some historians believe the origin of the wine grape dates to well before the 14th Century on the island of Sardinia where it has been known as Cannonau.

The Clarendon Hills winery is located just to the north and east of McLaren Vale. This winery is widely considered among the best Australian producers of the single varietal Grenache as well as a New World Rhône-style blend traditionally made with the addition of Syrah (called Shiraz in Australia) and Mourvedre.

It should noted that recent long periods of drought, record-setting temperatures, and high winds have ignited extensive deadly fires across Australia that has resulted in loss of human life and wildlife, and widespread destruction of human habitations and ecosystems. Many vineyards throughout the country were also victims of these fires. It is anticipated that it will be many years for the region to recover from this devastation. 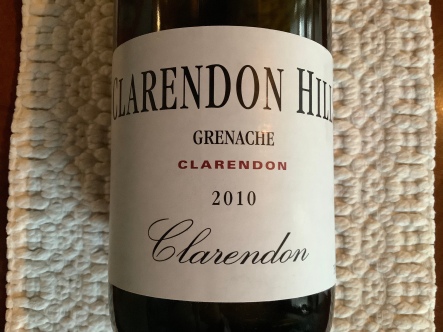 Tasting Notes:  A ruby-red color with a slight brownish tint seen on the edges. We decanted this wine two hours before dining which allowed the bouquet and flavors to really open up. The nose was like a beautiful symphony with the “sounds” of leather, sweet cherry and vanilla sugar playing in concert with one another. On the palate, the same “instruments” (cherry, vanilla, and leather) continued to play, with some earthy notes added. Very light, soft tannins brought it all together. The long, lingering finish continued the leather and cherry. A real Wow! of a wine. Couldn’t stop talking about it. And absolutely perfect with the roast pork.