Food: Filet Mignon is synonymous with elegance and romance. And Tournedos Rossini is … well … a breathtaking presentation of this prime cut of beef. And it’s ridiculously simple to make once you’ve got the ingredients. But first, some brief historical notes … the dish is indeed named for the acclaimed 19th Century composer, Gioachino Rossini, who is most often credited with the creation of the dish. Given his famed love of good food, that claim is certainly believable.

Our recipe is based on the notes outlined in the cooking tome (i.e., doorstop), Larousse Gastronomique, originally published in 1938, and encyclopedic in its scope of culinary knowledge. To serve two (you and your sweetheart), sauté two 1.5 to 2 inch fillets of beef in some butter about 4-5 minutes per side for medium rare meat. Remove from the pan and keep warm in a 200° F oven. Lightly sauté in butter two slices of baguette, two thin slices of foie gras, and a handful of fancy mushrooms. Remove the bread, foie gras and mushrooms and keep warm while you deglaze the pan with Madeira wine. The original recipe calls for foie gras and sliced truffles. What? You don’t keep these staples on hand in your pantry? (Sigh) … OK … we substitute chicken liver pâté for the foie gras and morels or porcini mushrooms for the truffles. Both mushrooms are available in dried form in most supermarkets these days. When using chicken liver pâté instead of foie gras, just gently heat up the slices without melting them. Assemble the tournedos by placing each fillet on top of a toasted piece of baguette. Put the pâté atop each filet, then cover with the mushrooms and reduced deglazing liquid. This is an extraordinary meal to serve that special someone. Or, plan on making it together. Sure beats dining out!

Wine:  Finisterre comes from the latin word meaning “end of the earth.” In Roman times, Cape Finisterre on the far western coast of Spain was considered the farthest point west of the known world, hence the “end of the earth.” But, we’re talking Australia here, mate. And that can be argued is the “end of the earth”, at least to us blokes here in northeastern U.S. Mornington Peninsula is a cool, maritime wine growing region just south of Melbourne on the southern coast of the land down under. The cool climate here is particularly well suited to making excellent Pinot Noir and Chardonnay. Not as well known as those wines of Western Australia, but well worth seeking out. 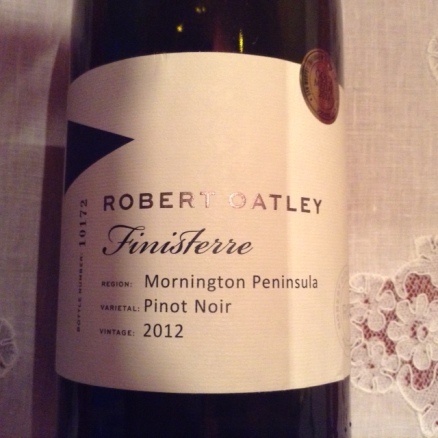 Tasting Notes:  A beautiful, light-bodied wine with a pale garnet color. A gentle fragrance of dark and red fruits, along with the very pleasant hint of red earth. These aromas carry over wonderfully to the palate with the most pronounced flavors being red currant and wild cherry. The fruit is nicely balanced with a core of acidity that adds an Old World element to this New World wine. A delicate wine that pairs surprisingly well with the more assertive flavors of the beef, pâté, and mushrooms.