Food:  We are always experimenting with different toppings for our standard pizza shell. Lately our shell is made from sourdough. If you haven’t tried a sourdough crust, you are missing something grand. For our Greek topping, we first combine 1/2 cup olive oil, 3 Tbs red wine vinegar and 3 Tbs lemon juice. Mix in a large pinch of dried oregano, then brush the mixture on top of the crust (NOTE: after brushing four pizzas you will have enough leftover for future pizzas or to make an accompanying salad). Next combine 10 oz of spinach (cooked, drained, and patted dry) with 1 and 1/2 cup of grated mozzarella (it is pizza after all!), 1 tsp of granulated garlic, and a pinch of grated nutmeg. Spread this mixture on top of the pizza shells. Finally crumble 3/4 cup  of feta cheese on top along with some seeded oil-cured black wrinkled olives. Bake in a hot 450F oven. Keep an eye on it to make sure it doesn’t burn. This all makes enough for four 8 to 10  inch personal-size pizzas. 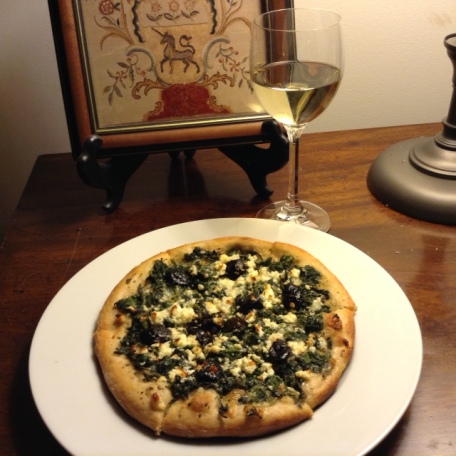 Wine: The temptation here is to pair the Greek pizza with a nice Greek white wine. Perhaps an Assyrtiko. But, being adventurous souls (and currently lacking said wine in our cellar), we chose an unoaked Chardonnay from Oregon. The clean, bright taste of an unoaked Chardonnay unadorned with oak that much of Chardonnay today is made, proved to be a lovely companion to the Greek pizza. Oregon has become one of the go-to places for Chardonnay. Although Chehalem Wines is best known for its extensive line of premier single vineyard pinot noirs, their Chardonnays are becoming more and more well regarded.

Tasting Notes:  A pale gold color. The smells of  ripening cantaloupe is intoxicating on the nose, while cantaloupe and peach are both present on the palate. The salty elements of the pizza bring out the gentle sweetness of the wine. And the finish is long and very nice.

Views and Maps of the Willamette Valley in Oregon:  willamette valley